I know it's Friday, not Monday, but I'm still starting a theme week on the Bamboo Bookcase. It's E. Nesbit week! I definitely need a whole week to talk about Edith Nesbit. She wrote a ton of books for children and adults, they are all free ebooks, and they are almost all wonderful. (Let's just get this clear right away: don't read her poetry.) 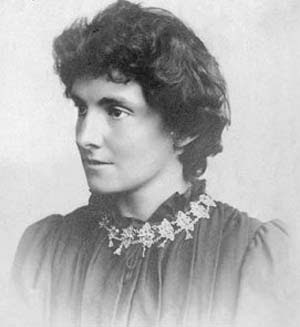 (Check out Edith Nesbit's haircut! That short hair was shocking in its time.)

I am so fascinated by Edith Nesbit and her whole social circle. She was a follower of William Morris, and she was friends with H.G. Wells and George Bernard Shaw. In 1899 she moved with her husband and her best friend (who was her husband's lover; Edith adopted their children) into an amazing old country house, and it became a gathering-place for all of her writer, artist, and activist friends. When you read an E. Nesbit novel, you get a glimpse into that unconventional life. It's basically like reading a gossip magazine for me. If gossip magazines were about eccentric Edwardian writers. 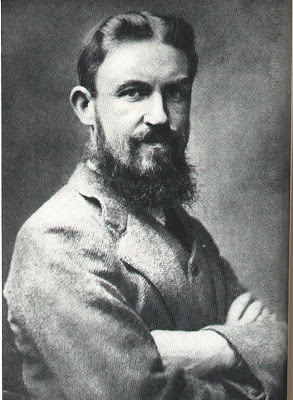 (All of those artistic turn-of-the-century men had luxuriant beards like George Bernard Shaw here.)

The most gossipy and hilarious E. Nesbit books are the ones starring the Bastable children: The Story of the Treasure Seekers, The Wouldbegoods, and New Treasure Seekers or, The Bastable Children in Search of a Fortune. The Bastables also show up in some short stories in Oswald Bastable and Others, and they make a cameo appearance in The Red House, one of E. Nesbit's novels for adults. The Bastable books are about a family of six children who get into trouble over and over again. But the minor characters -- the grown-ups -- are poets, archaeologists, editors of literary magazines, sandal-wearing reformers, and modern, cigarette-smoking women with short hair.

(Illustration from The Wouldbegoods of the Bastables playing a trick on an eminent archaeologist.)

When I was a child, my favorite book in this series was The Story of the Treasure Seekers, in which the children realize that their father has lost most of his money, and try to earn enough money to "restore the fallen fortunes of the ancient House of Bastable," or at least to get back to a time when they had pocket-money and currant puddings. They try writing a newspaper, digging for gold, becoming bandits, selling sherry door-to-door, and lots of other schemes, all of which turn out hilariously. 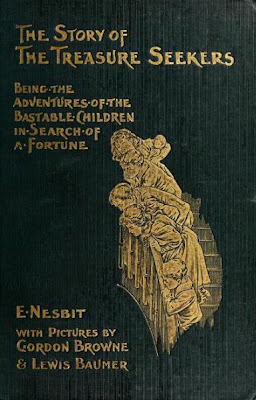 Now my favorite Bastables book is The Wouldbegoods, which is the name of a good-deeds society that the Bastable children create. I love how E. Nesbit turns the moralizing children's novel inside out. In most moral children's stories from the Victorian and Edwardian periods, the children learn to be good. Or, they learn to be good and then they die. But I love the way the Bastables, while trying to copy these fictional children, end up destroying property, setting farm animals loose, draining a canal, and burning down a bridge. And they never learn their lesson.

(Scene from The Wouldbegoods in which the children flood their house.)

If you like P.G. Wodehouse, you will like the Bastables series. They have the same sense of humor. You get the narrator who doesn't understand everything that's going on around him (in the Bastables books it's Oswald, the eldest child), you get the mixture of fancy literary style and everyday slang, and you get the light-hearted humor of a story that never takes itself too seriously. Here is an example from The Wouldbegoods, about the morning after the establishment of the Wouldbegoods society:

"The next morning Oswald awoke early. The refreshing beams of the morning sun shone on his narrow white bed and on the sleeping forms of his dear little brothers and Denny, who had got the pillow on top of his head and was snoring like a kettle when it sings. Oswald could not remember at first what was the matter with him, and then he remembered the Wouldbegoods, and wished he hadn't. He felt at first as if there was nothing you could do, and even hesitated to buzz a pillow at Denny's head. But he soon saw that this could not be. So he chucked his boot and caught Denny right in the waistcoat part, and thus the day began more brightly than he had expected." 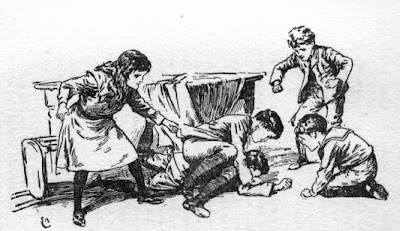 (An illustration of this passage from New Treasure Seekers: "The five others now fell on Oswald and rolled him under the table and sat on his head so that he had to speak loudly and plainly."

The Wouldbegoods and New Treasure Seekers are also really good for glimpsing fictionalized versions of Edith Nesbit and her interesting friends. The Bastables are friends with their neighbor's uncle, who writes serial stories for literary magazines, and with a famous poet named Mrs. Leslie. In The Wouldbegoods, the children befriend characters based on Edith Nesbit herself and her husband, Hubert Bland. The Edith and Hubert characters are called "Mr. and Mrs. Red House" after their wonderful country estate. 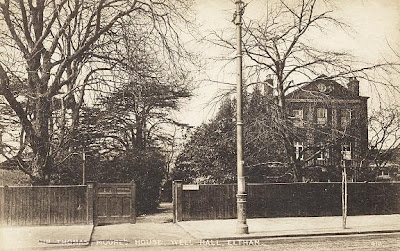 (Well Hall House, the real-life model for the Red House.)

But the best characters of all are in The New Treasure Seekers, and they are the ones that the Bastables meet after they're sent to the seaside to recover from measles. They stay with Miss Sandal, who wears long, drab dresses, is a vegetarian, and tells the children, "The motto of our little household is 'Plain living and high thinking.'" The children, confused by her minimalist decorating style, assume that she's terribly poor and spend most of their trip trying to raise money for her. Then there is her brother, Eustace Sandal, a reformer who tries to raise the consciousness of the lower classes, but who ends up falling off some scaffolding while he is trying to give a pamphlet to a workman. 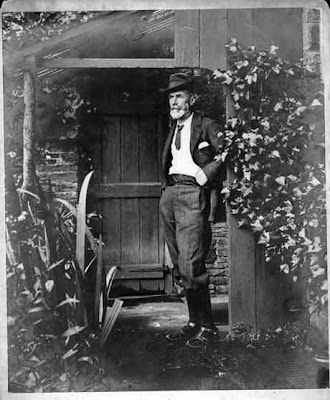 (I think that Mr. Sandal might be a lovingly satiric portrait of Edward Carpenter, who introduced sandals to England.)

Miss Sandal has two more siblings: Mrs. Bax, who is one of E. Nesbit's cigarette-smoking, short-haired, down-to-earth women, and a lunatic brother who draws beautiful chalk sketches of flying things all over Miss Sandal's white walls. I can't help thinking that all of these fantastic characters are amalgams of Edith Nesbit's actual friends. She even named the main character, Oswald Bastable, after her writer and genealogist friend Oswald Barron, to whom she dedicated The Story of the Treasure Seekers. 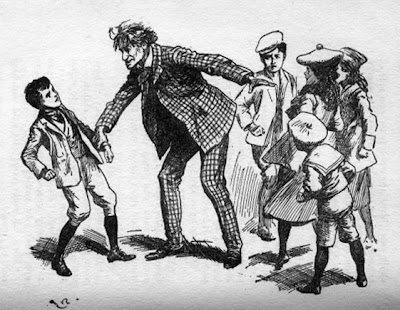 I should warn you that the Bastables books do have the occasional racist language, and also some insensitive depictions of other cultures. In The New Treasure Seekers, for instance, you have to suffer through one episode where the children meet some Chinese immigrants who speak a dialect that is really painful to read. But for the most part, you can't top these books for comic value and gossipy Edwardian goodness. If you like comic British novels and eccentric characters, you have to read these books. I promise that you will laugh.
Posted by elizabeth at 3:59 PM

The Semi-Attached Couple, by Emily Eden

About the Bamboo Bookcase

When I was little, I spent hours in my grandmother's attic reading her collection of books: mostly books for girls from the 19th and early 20th century. Those books are still some of my favorites. Now they are kept on a bamboo bookcase at my parents' house. This website is my virtual bamboo bookcase, which I am busily filling with all of the old books that I love.

"From her earliest Youth she had discovered a Fondness for Reading." -- The Female Quixote

I live in Florida with my husband, my cat, and too many books to fit comfortably into our house. I teach classics.

Some of my favorite free (or almost free ebooks)